Back to the Future for historic steam engine 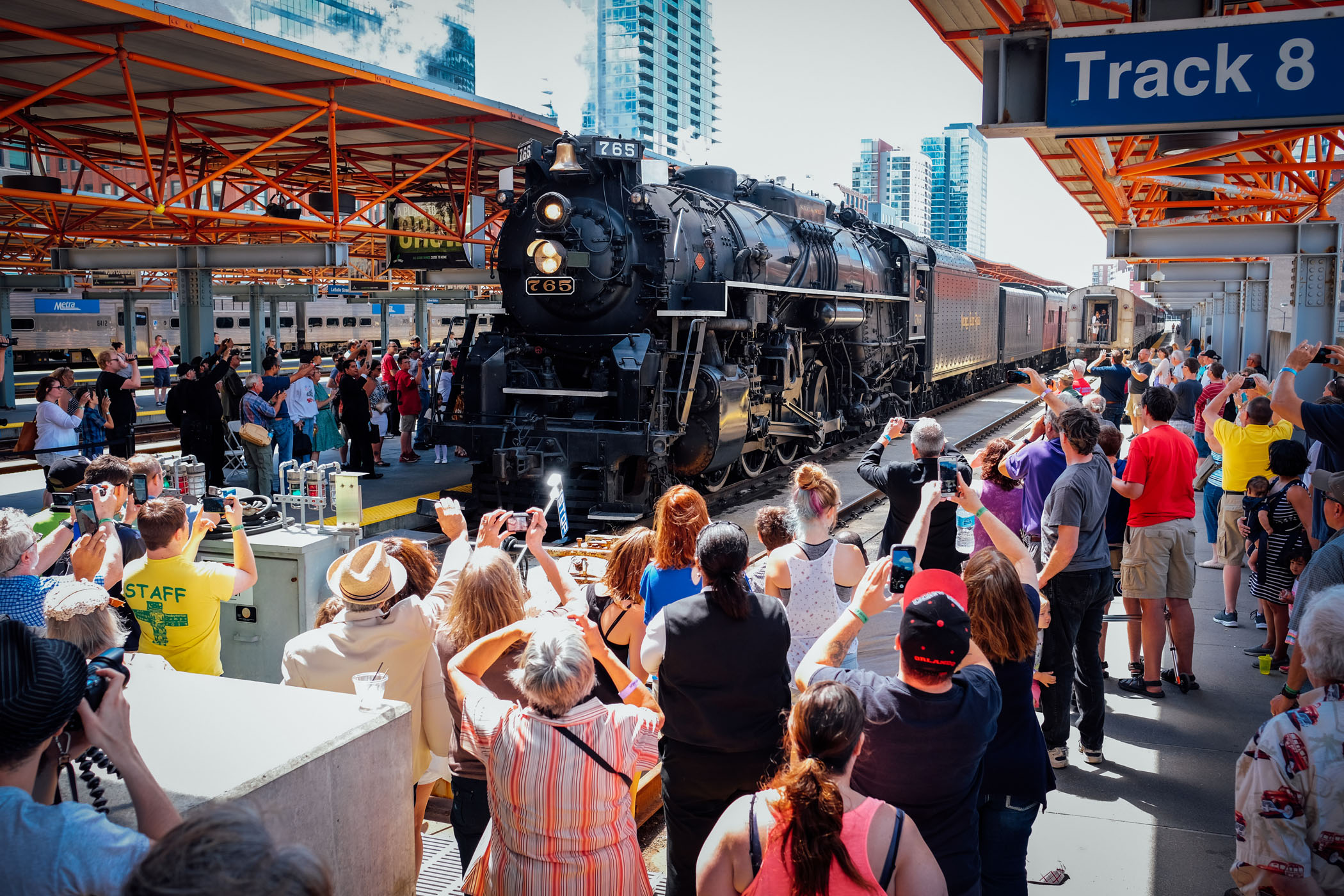 The News Sentinel joined us on the Joliet Rocket and reports on progress for Headwaters Junction:

With the city reportedly close to buying a 28-acre slice of prime downtown real estate, backers of a rail-themed park say it would be the ideal place for their vision — a vision that whisked participants along rails and back in time over the weekend in Chicago.

Pulled by the 440,800-pound Nickel Plate Road Engine 765, which would serve as the centerpiece of the proposed $15 million Headwaters Junction, passengers aboard the reincarnated Joliet Rocket Saturday experienced a bit of what train travel was like in the 1940s and ’50s, and could be again if the project is realized.

That remains to be seen, of course, but as the train traveled the 44 miles between Joliet and Chicago the people who stood along the tracks to marvel at or photograph the rolling anachronism left no doubt steam locomotives have lost none of their appeal.

That kind of appeal convinces Headwaters Board Chairman Don Steininger the project would be a success — if it can find the land and money needed to get off the drawing  board.

“You do things like this for exposure. This will be the first of many fundraisers,” said Steininger, who arrived at Chicago’s LaSalle Street station aboard “Hickory Creek,” a restored, round-ended 1948 Pullman observation car that once served celebrities like Frank Sinatra as they rode the 20th Century Limited but on this day was part of an excursion that attracted vintage train enthusiasts from Fort Wayne and throughout the Midwest. Steininger, who is also a developer, said Headwaters Junction was originally planned for land now occupied by the Pepsi distribution center near Superior Street, but has been forced to look elsewhere because “the city wants (the property) for economic development.”

Steininger said the city has also been negotiating to buy the so-called “north river” site that was once home to OmniSource, a metal recycling firm. He would like Headwaters Junction to buy about 18 acres there, and now that the organization is close to not-for-profit status, fundraising can begin in earnest. Government sources such as the Capital Improvement Board and Regional Cities, along with local foundations and businesses such as Steel Dynamics will be approached to help pay for a project that would begin with a turntable, with later phases including a small-gauge train to the Children’s Zoo, a depot and restaurant, roundhouse and other features.

“This can be a catalyst for riverfront development,” said Kelly Lynch, an officer with the Fort Wayne Railroad Historical Society who has been working on Headwaters Junction for at least eight years. “Events like this showcase how these trains can attract people. It’s a magical experience.”

He’s right about that. As passengers milled around LaSalle Street station, many dressed in clothes of a bygone era, they posed for photographs in front of the 73-year-old 765 and waited in line for a quick glimpse of its cabin. Some sat in folding chairs and ate dinner so close to its massive wheels they could feel the heat from the boilers. They didn’t seem to mind; the view was worth it. It was a small sample, but did nothing to undermine a study last year indicating Headwaters Junction could attract 120,000 visitors per year.

The city considered buying the north river property in 2008 but decided not to exercise its purchase option.  As a former industrial site it is expected to require some degree of clean-up prior to redevelopment, but Steininger said the environmental issues are “not insurmountable. It’s not as bad as people think.” The property was listed for sale last year for $6 million. City officials were unavailable for comment.

If Headwaters Junction does indeed locate on the old OmniSource site, it will be mark homecoming of sorts. In 2010, the Lake Shore and Michigan Southern Railroad freight depot that had been on the north river site for 97 years was torn down — much to the dismay of Lynch and others who believed a restored depot could be incorporated into Headwaters Junction.

The building is gone, but the 765 is still here and — as its weekend in Chicago proved — still capable of evoking memories and inspiring awe.