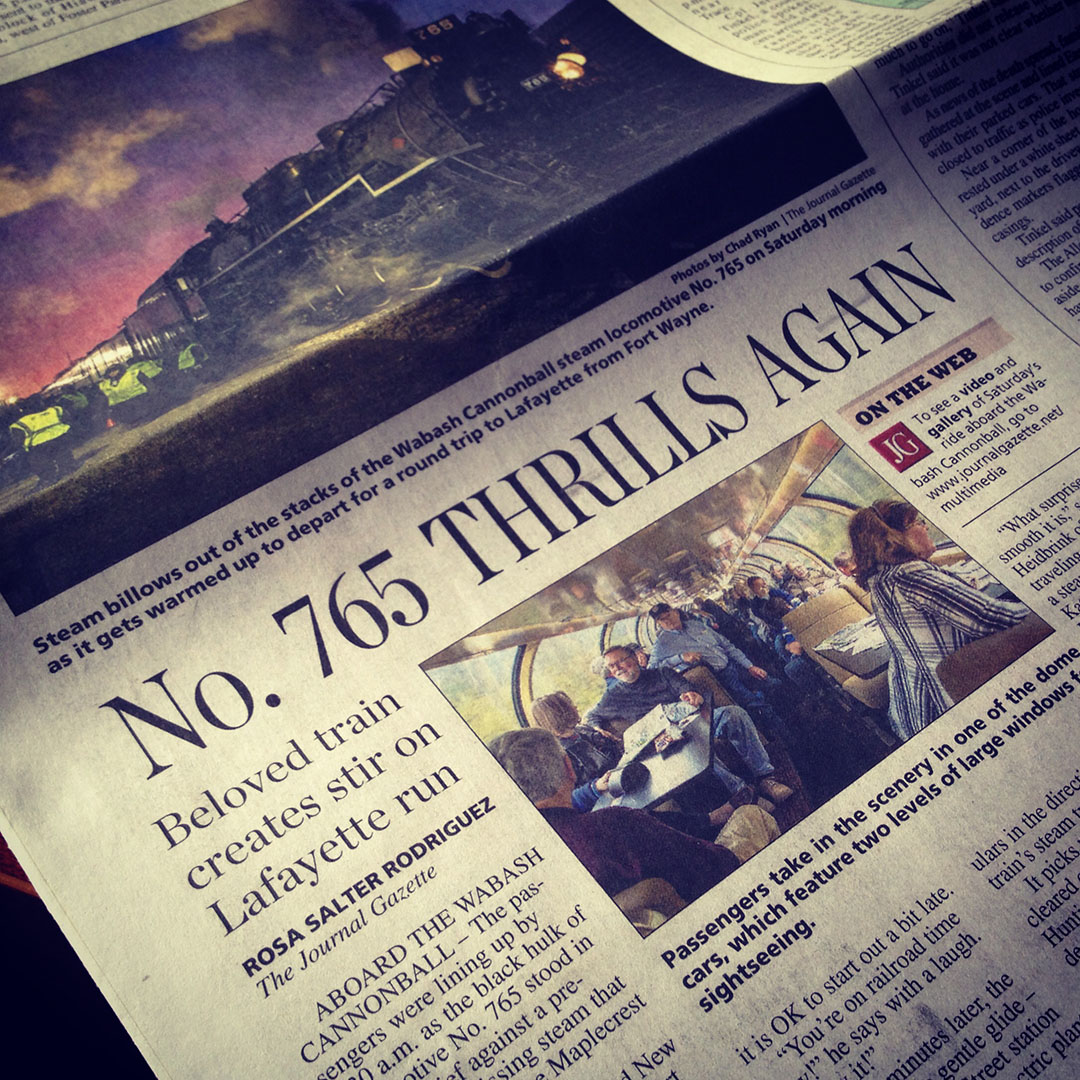 The centerpiece to Headwaters Junction re-introduced itself to Fort Wayne in a big way on October 26th and 27th.

Every major television and newspaper in the city (as well as others along the route) reported on the 765 as it made its way on two excursions between Fort Wayne and Lafayette in a recreation of a famous Wabash passenger train, The Cannonball.

The trips sold out in less than 2 hours when tickets went on sale September 1st. They are the first railroad passenger excursion out of Fort Wayne in 20 years and the 765’s first excursion out of its hometown since 1993. Passengers, many from the midwest but as far as Texas, New Jersey, and Canada, were treated to a layover in Lafayette, live music on-board, and a long line of onlookers and “train chasers” that followed the train almost continuously over the weekend.

From on board, the Journal Gazette reported:

From California and New York, Ohio and Texas, Fort Wayne and Crown Point, they’d come, awaiting what for some would be a trip of a lifetime – and one that hadn’t been possible for 20 years, the last time a steam-driven passenger train departed from Fort Wayne…

…All along the track to Lafayette, onlookers by the hundreds wave at the train from their SUVs, or pause on top of their tractors or combines and stare. People snap pictures from cameras mounted on tripods set up at the end of one-lane gravel lanes and stand at a depot with cellphones raised as the 14-wheeled chugging monster of an engine, all 400-tons of it, passes and then lets out a series of long, low-pitched whistles crossing the Wabash River in Logansport.

Fort Wayne Speaks released an hour long episode recorded on board, interviewing passengers and crew. You can listen here.

The railroad historical society has linked to all of the news coverage here.

Meanwhile, the city’s first meeting with the riverfront development consultant, which is to include Headwaters Junction and the 765 in the development study, is scheduled for December 5th.

How may Fort Wayne finally harness the proven draw of the 765?