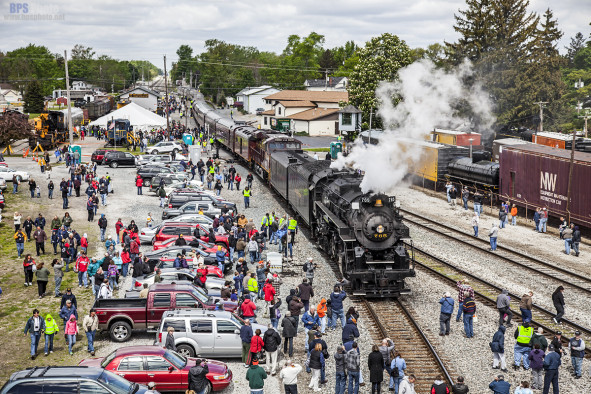 On September 1st, tickets to ride behind Headwaters Junction’s central attraction on trips between Fort Wayne and Lafayette went on sale. Tickets sold out in less than 2 hours. As of this writing, 700 people are on the waiting list and more cars are being added to accommodate interest in the trips.

Last month, the Fort Wayne Railroad Historical Society announced that in October its 765 locomotive, a gigantic, old-fashioned, coal-fired steam locomotive, would be making two excursions from Fort Wayne to Lafayette and back – a 230-mile trip.

I wondered, though, how did ticket sales go for the October trips for the city? Usually, tickets for the train’s excursions sell out in a couple of days.

Well, in Fort Wayne, tickets went on sale Sunday and sold out in an hour and a half. Four hundred people are on a waiting list if more cars are added to the train. Passengers include people from as far away as Florida, Texas and New Jersey.

One inconvenient aspect, though, is that there is no suitable boarding spot in Fort Wayne. For the October excursions, for example, passengers will have to board at the Do it Best headquarters between Fort Wayne and New Haven.

There is a push to establish a home for the train near downtown Fort Wayne, possibly using some of the Legacy money. The train would have access to all possible routes. The train, after all, is permitted to use all 22,000 miles of Norfolk-Southern track. The problem is that creating a new base for the train would be expensive, upward of $15 million.

I’ve spoken to people about the train’s potential in the past, but a lot of people tend to brush it off as a novelty. That bugs me.

Old-fashioned railroad operations attract huge crowds. There’s a little railroad in Strasburg, Pa., that runs 45-minute trips on a route that goes out 4 1/2 miles and back. It attracts 350,000 people a year, according to officials with that operation. The Fort Wayne Railroad Historical Society has other engines in addition to the behemoth 765 that could do the same thing here.

The community doesn’t seem to realize what it has, sort of like the woman who brought her $20 table to “Antiques Roadshow” and found out it was worth $450,000.

Fort Wayne is always looking for new ideas that will draw people into the city and get them to stay in the hotels and eat in the restaurants and see the sights.

This train is unique, and it’s proved its ability to draw crowds.

“We have an amazing zoo,” Lynch said. The train, he said, “is like having the last tyrannosaurus rex and no zoo to put it in.”