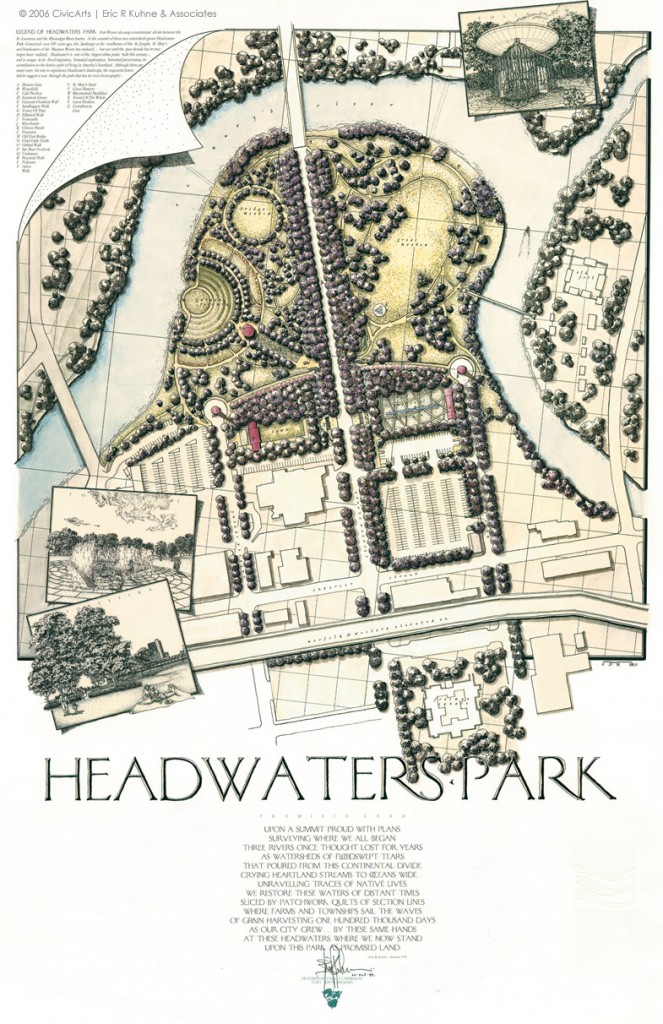 History does repeat itself.

In the early-to-mid 1990s (and even before) the conceptualization and realization of Headwaters Park was one of Fort Wayne’s first modern redevelopment efforts, turning acres of flood-plain back into a public space. Headwaters Park was originally intended to encompass over 200 acres of riverfront property, but the sheer size and scope of the vision was scaled back to the first two phases we enjoy today.

In the original master plan, the park was to reach as far north as Science Central and North River (then the Omnisource scrap yard), as far east as the City Water Works, and stretch further to West Main Street. Originally proposed as a state park, Headwaters Park found home on 30 acres of industrial riverfront, leaving the other hundreds of acres and their subsequent ideas unrealized.

World renown architect (and former New Haven resident) Eric Kuhne envisioned North River and the since demolished freight house as a “nexus or hub” where multiple transit systems came together, or as we call it “where river, rail, and trail connect.”

Fully aware of the area’s transportation history, Kuhne proposed including river, trail, and rail access at the site of the freight station, calling it “Central Park Station.”

“as they have done over the past years, the Fort Wayne Railroad Historical Society will operate railroad excursions using the historic railroad rolling stock stored and maintained at the RailRoad Museum. These excursion trains will depart the Transportation Depot at Central Park Station and tour the Midwest. This service thus constitutes part of the park’s external transit linkage to the region…As part of the park, the [railroad] will provide a rich history of the entire development of railroads in the region and expand the educational aspects of the park. Full development of these facilities for an expanded “Fort Wayne Railroad Historical Museum” will require further study and review. The Society has preliminary plans for the entire development to be located in the New York Central Yards west of downtown.”

To recap: in the early 1990s an incredibly successful and respected visionary saw the potential in uniting three of the city’s great natural assets, going so far as to specifically name steam locomotive no. 765.

Two decades later that idea has resurfaced with a 21st Century mindset, completely unaware of the proposal years before.

This has become more than a park or a museum as envisioned in the pages linked above, it is a regeneration, an experience.

And twenty years is a long time to sit on this type of potential.